Last year my wife and I finally made it to Cookhouse for a good New Orleans’ meal. (It’s amazing! If you haven’t been there stop reading this blog and head there right away!) To start my wife ordered a cup of duck gumbo. I was lucky enough to sneak a bite, and I have to say that duck gumbo is my favorite type of gumbo.

So when the topic of Christmas Eve dinner rolled around my wife suggested we try to making it ourselves. I jumped at a chance to smoke the duck.

Interestingly enough hunting around for a recipe didn’t turn up much. The best I could find was a this one on Traeger’s website.

We rubbed the duck down with some olive oil and a basic poultry rub (Unfortunately I don’t remember where I got the recipe from).

Here is what the duck looked like after we rubbed it down: 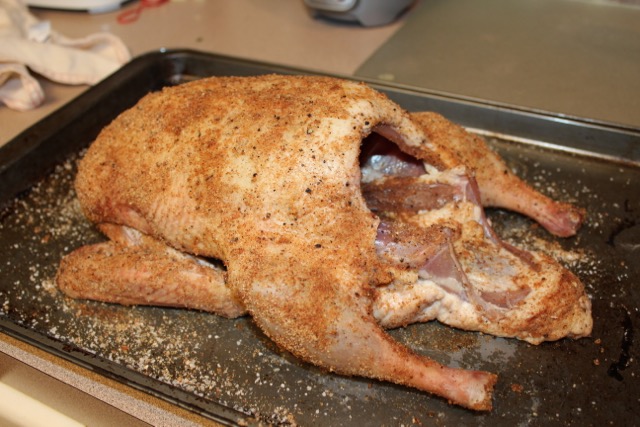 I started the cook around 1:55pm with two handfuls of Alderwood and my egg at 325°F.

For first hour my egg was running around 400°F which was hotter than I would like. Luckily I am managed to get it back down. I suspect the culprit might have been my blown gasket which I have since replaced and I haven’t had problems since.

I also seemed to lack some good notes on this cook. I didn’t record the final temp when I pulled it off. I suspect that one breast was significantly warmer than my target of 160°F and one was slightly under. Since this duck was bound for the gumbo pot, it didn’t matter much. I was also a little confused about the target temperature I should shoot for. My usual sources didn’t have a suggested temperature. Several places also mentioned treating duck like you would red meat and that it should be served slightly rare. In the end, I just opted to the safe poultry recommendation of 160°F.

FYI, the gumbo ended up being just as good if not better than the Cookhouse.