My blog has more or less been on a permanent hiatus for the past couple years, but I still find myself consulting it everytime I do a major cook. I have gotten to the point where half my notes are on my blog and the other half in a moleskin notebook. After trying to reconstruct the perfect Thanksgiving turkey the past couple years, I figured it was finally time for a new post!

The first step in a great Thanksgiving turkey is, of course, finding the right turkey. I sent my wife out to find a nice turkey with low sodium content and she came back with a beautiful 11.53 lb HEB natural never frozen turkey with 3% sodium content.

I just recently read Salt, Fat, Acid, Heat: Mastering the Elements of Good Cooking by Samin Nosrat. In it she says that you should dry bring turkeys 2 days in advance. So two nights before Thanksgiving I spatchcocked my bird like usual and applied 3.5-4 teaspoons of Mortons kosher salt. I placed the turkey on a drying rack on top of a baking sheet and wrapped it up in plastic wrap. The turkey went in the fridge. The following night, I removed the plastic wrap and lightly dusted it with 1 teaspoon of baking powder to help dry out the skin. This was something that was suggested by Serious Eats. Then I put it back in the fridge for one more night. 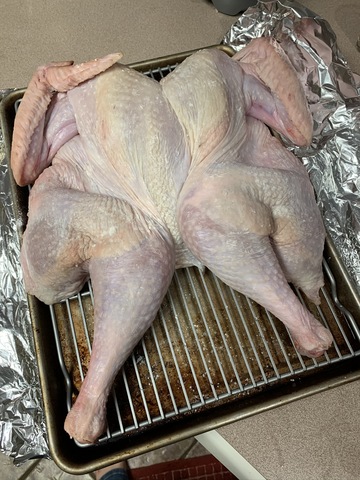 The day of Thanksgiving around 10am, I injected it with a butter based poultry sauce from Spruce Eats. I loved this sauce! It definitely tasted like Thanksgiving to me. I opted to use low sodium chicken broth and omitted the salt because it had already been dry brined. Here is the recipe for your convenience:

I really love using Todd’s Dirt throughout the year and I had hoped to use it on my turkey last year, but I was worried about over salting my turkey. This year I discovered Todd’s Low Down Dirt which is the same great rub without the salt. I mixed this up with stick of softened butter until it was a good consistency and rubbed it under the skin. It took me a while to find a good technique. I ended up putting a wad of the butter mixture in the tips of my fingers of on one hand and poking it under the skin. With my other hand, I grabbed the chunk and pushed it around. This worked, but it was a little cumbersome. While I was researching turkey recipes, I can across Thermoworks turkey video where he used compound butter patties. I might want to try that next year. I had hoped to smear the butter mixture over the outside of the skin, but I had problems getting it to “stick” so I opted to coat it with olive oil and dusted it with more low down dirt.

I started my egg around 10:50am with a target temperature of 325. About 3 hours before, I started I soaked 1 large handful of pecan chips along with 1.5 handfuls of apple wood. The turkey went on at 12:20pm and the pit temperature was 356. 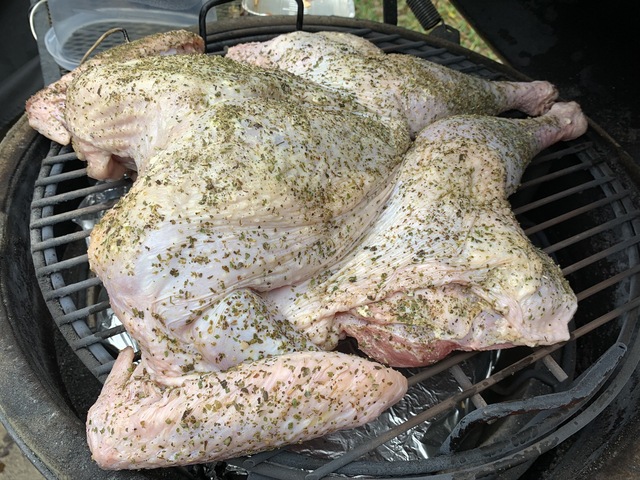 I ended up pulling the turkey at 2:20pm. The turkey breast was 160 and the thighs were around 190. I opted to cut into it 5 minutes after I pulled it off (the turkey was a bit late). It turned out PERFECT. It would have been nice to give it 20 minutes of resting time. 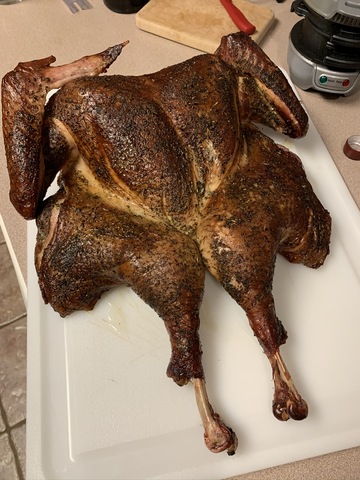 For the next time it might be interesting to try some non-traditional flavors. Maybe something with some orange or more citrus flavor (Adding a little acid). I should also try to count on a 2 hour cook with 20 minutes to rest.