I decided to take the week of Thanksgiving off work with the goal of not doing anything productive –including cooking a turkey. (My sister-in-law cooks our Thanksgiving every year. I usually just do one for fun and turkey sandwiches). I had a change in heart when my wife found a 11.13 lb turkey for 16 bucks at our local grocery store.

We decided to keep dinner very simple and go with the basics. We had the turkey with some green beans, mash potatoes combined with roasted garlic I did on the grill, and some rolls. Dinner was topped off with an amazing slice of homemade pecan pie courtesy of my mother-in-law.

My wife suggested that I spatchcock the turkey because it always comes out so well with chicken. I dug out my favorite carving knife along with some poultry shears and went to town. I was surprised at how much harder it was to cut out the backbone of our turkey, but in the end I managed and it came out looking this this: 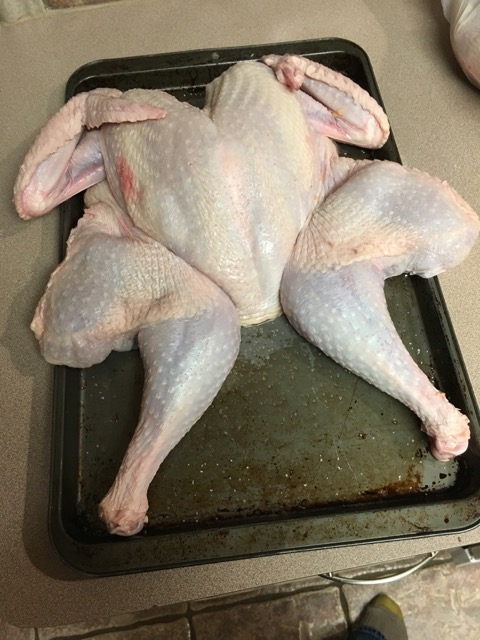 In years past I had dry brined the turkey overnight using a little bit of kosher salt in the hopes of keeping it extra juicy. According to the label our turkey contained 7% sodium so I was very concerned with oversalting it, but in the end I throw caution into the wind and gave it a very light sprinkling and put it in the fridge to sit overnight.

I also wanted to try out a different rub this year. I was hoping to use Todd’s Dirt but I couldn’t find any at Central Market. (It looks like they might have pulled out of Texas). So I opted to use Meathead’s poultry seasoning. I liked it better than his Simon And Garfunkel Rub. I mixed it up the day off along with 1 tbsp of olive oil. I then rubbed it under and over the skin. When I finished it looked like this: 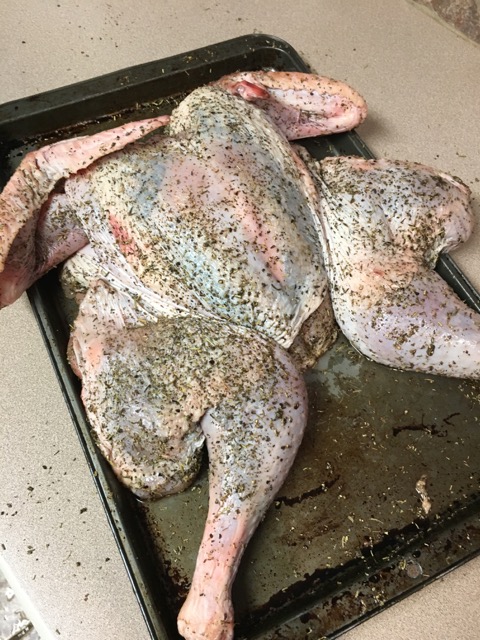 I also injected it with 4oz of melted butter to help keep it extra moist.

The turkey went on at 3:30pm when the egg had barely come up to 325°F. (I was running late!) I opted to use my flameboss (I love that thing). After putting the turkey on, I noticed that the pit temperature drastically fell. Upon closer inspection I discovered that the turkey was touching the probe and I had to readjust it. So it wasn’t a smooth start.

Around 4:20pm, I covered the wingtips and drumstick tips up with aluminum foil coated with olive oil to keep them from burning. I also tossed another handful of applewood on to brown it up a bit more. 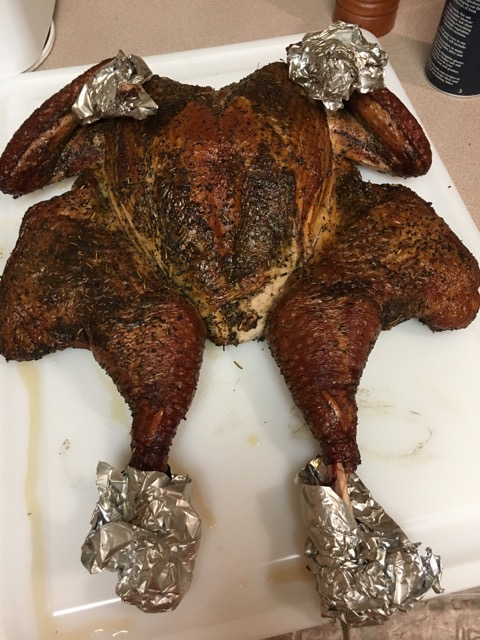 It was super juicy and amazing! I was shocked that it only cost 16 bucks. 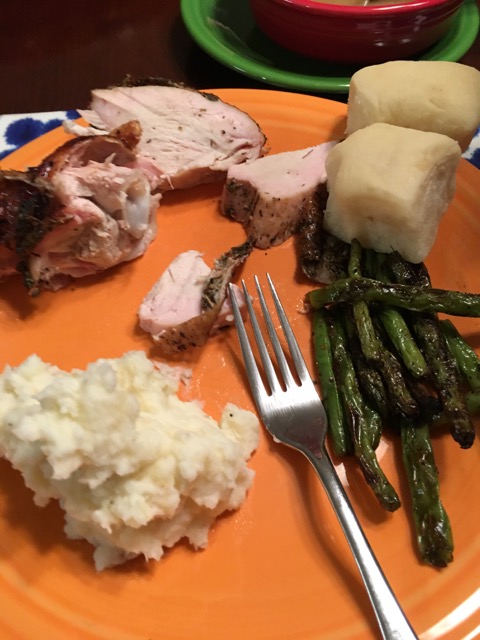 Looking back from the notes from my notes from years past, I suggested more smoke and more salt for brining. This year I finally gave and was all the better for it. I think next year I might be able to push it to one more handful.

My pit controllers view of the cook can be found here